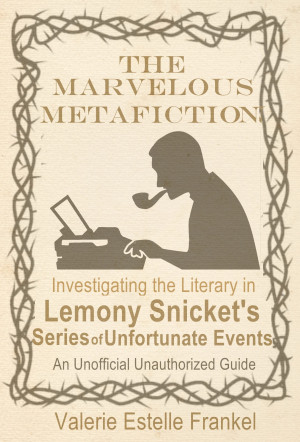 The Marvelous Metafiction: Investigating the Literary in Lemony Snicket’s Series of Unfortunate Events

A Series of Unfortunate Events delighted readers young and old with far more than clever mysteries and harrowing hijinks. The books celebrate language itself, packed with wacky definitions and Sunny’s playful puns. Idioms rise to a new level as the books curve their plots to literalize barking up the wrong tree or being in the belly of the beast. The Netflix show adds even more fun, while All the Wrong Questions blends a celebration of children’s novels with noir parodies. All this helps juvenile readers expand their vocabularies while cultivating a love of clever wordplay. In this volume, it’s all explained: the parodies of classics, the double entendres, the subtle references many have missed. It’s a lighthearted romp through this deeply nuanced series, revealing how clever it truly is.

The Secrets Solved: Unraveling the Mysteries of Lemony Snicket’s A Series of Unfortunate Events

The final season of A Series of Unfortunate Events premiered January 1, 2019 on Netflix. As many fans had hoped, it answered many questions, neatly tying up the mysteries never solved in the series. However, the rather pat history of the villains and their schism with the heroes doesn’t match the shadowy multigenerational feud of the books. Now, The Secrets Solved: Unraveling the Mysteries of Lemony Snicket’s A Series of Unfortunate Events examines the clues from novels, prequel series, interviews, and the best fan theories to unravel the major questions of the series. Do the Baudelaires really have a fortune? What crime did Lemony Snicket commit? Who is the mysterious taxi driver? What’s really in the sugar bowl? For the first time in print, all these will be clearly, logically answered.