Bringing the Hottest New Releases in Science Fiction and Fantasy

to Silicon Valley Comic-Con and Baycon 2018!

All in the glittering Silicon Valley

Come read the hottest new releases in Science Fiction and Fantasy…all from Silicon Valley Authors! G. David Nordley is a (mostly) retired astronautical engineer, four-time winner of Analog’s AnLab, and a past Hugo and Nebula award nominee. Together with C. Sanford Lowe, he’s written a series of novelettes about the making of a black hole. Jason Malcolm Stewart is author of the horror-mystery The Eyes of the Stars with Double-Dragon Publishing. Sandra Saidak produces the Kalie’s Journey series – Neolithic Age goddess novels. Sarah Stegall’s works include the young adult lunar adventure Farside, a series of murder mysteries set in San Francisco (Deadfall and Deadwater), and the science fiction novel Chimera. Valerie Estelle Frankel writes pop culture criticism on Game of Thrones, Sherlock, Hunger Games, Buffy, and other fan favorites.

C. Sanford Lowe (pen name of Candace S. Lowe) is a science fiction writer who most recently co-authored a series of novelettes about the making of a black hole with G. David Nordley. Formerly a newspaper reporter in Boston, a deputy sheriff in Arizona, and an airline pilot in New Mexico, Lowe currently works in IT at Stanford University. She is winner of the best short story for the New England Science Fiction Association. When not writing, she collaborates on experimental music with her husband, and tutors students studying English as a second language.

G. David Nordley is the pen name of Gerald D. Nordley, a (mostly) retired astronautical engineer whose second career is writing. His main interest is the future of human exploration and settlement of space, with stories typically focusing on the dramatic aspects of individual lives within the broad sweep of a plausible human future. His research also fuels nonfiction articles and occasional technical papers. He has approximately 100 published stories and articles, is a four-time winner of the AnLab, the Analog reader’s award for best story or article of the year, and a past Hugo and Nebula award nominee.  More info, including lists of his publications, may be found at http://www.gdnordley.com 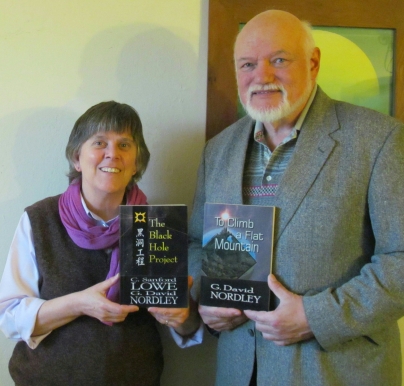 After the Vikings: Tales of a Future Mars

To Climb a Flat Mountain

How Beer Saved the World

Valerie Estelle Frankel has won a Dream Realm Award, an Indie Excellence Award, and a USA Book News National Best Book Award for her Henry Potty parodies. She’s the author of many books on pop culture, including From Girl to Goddess: The Heroine’s Journey in Myth and Legend, Buffy and the Heroine’s Journey, Katniss the Cattail: An Unauthorized Guide to Names and Symbols in The Hunger Games, Teaching with Harry Potter, and Harry Potter: Still Recruiting. Once a lecturer at San Jose State University, she’s a frequent speaker on fantasy, myth, pop culture, and the heroine’s journey. Her latest book is the Hobbit spoof, An Unexpected Parody.

An Unexpected Parody: The Unauthorized Spoof of The Hobbit Movie

The Many Faces of Katniss Everdeen: Examining the Heroine of The Hunger Games

Teaching with Harry Potter:  Essays on Classroom Wizardry from Elementary School to College

Katniss the Cattail: An Unauthorized Guide to Names and Symbols in The Hunger Games

Buffy and the Heroine’s Journey

From Girl to Goddess: The Heroine’s Journey through Myth and Legend

Henry Potty and the Pet Rock

Sandra Saidak graduated San Francisco State University in 1985 with a B.A. in English.  She is a high school English teacher by day, author by night.  Her hobbies include reading, dancing, attending science fiction conventions, researching prehistory, and maintaining an active fantasy life (but she warns that this last one could lead to dangerous habits such as writing).  Sandra lives in San Jose with her husband Tom, daughters Heather and Melissa, and two cats.   Her first novel, “Daughter of the Goddess Lands”, an epic set in the late Neolithic Age, was published in November, 2011 by Uffington Horse Press.  The sequel, Shadow of the Horsemen came out in July of 2012.  Learn more at http://sandrasaidak.com/

Shadow of the Horsemen: A Prehistoric Epic (Kalie’s Journey, Book 2)

In the Balance (A Collection of Short Stories)

Jason Malcolm Stewart is an author, journalist and public relations professional who lives in the San Francisco Bay Area. When not working on his writing or reading, Jason can be found driving around Northern California with something radioactive in his trunk. Visit http://about.me/jaymal or www.criticstudio.com for more information.

The Last Words of Robert Johnson and Other Tales

Look Back In Horror: A Personal History of Horror Film

The Eyes of the Stars, by Double-Dragon Publishing, 2012

Sarah Stegall has been reviewing SF and fantasy television, books and movies since 1994. She researched and helped write the first three Official Guides to The X-Files, and wrote online content for TV Guide for four years. She currently resides in Northern California. Her most recent novel, Chimera, is available online everywhere. Her web site is www.munchkyn.com.

Outcasts: A Novel of Mary Shelley

X-Files: The Truth Is Out There