Katniss the Cattail: A Guide to Names and Symbols in Suzanne Collins’ The Hunger Games 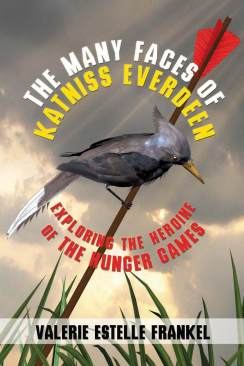 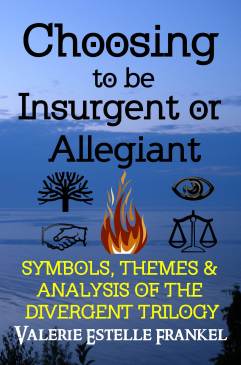 The perfect treat for Hunger Games fans of all ages.

May 2013: The Many Faces of Katniss Everdeen: Examining the Heroine of The Hunger Games. Zossima Press. Table of Contents and First Chapter

Choosing to Be Insurgent or Allegiant: Symbols, Themes, and Analysis of the Divergent Trilogy

The Divergent series is delighting the world with its epic of Tris and Four struggling through revolutions to create a better world. But there are deeper meanings and symbols beneath the surface. Why is it fitting that teens numbered three and four should remake the world? How many Biblical references appear? Why are ravens and crows such popular symbols? And what themes and images does this series share with The Hunger Games and all the other dystopias, past and present? Today’s groundbreaking studies in brain chemistry and psychology tests merge with a frightening future in the recognizable ruins of Chicago. As Tris becomes a warrior woman on the classic heroine’s journey, she discovers the deeper truths of the five Factions, and in so doing, the deeper truths of herself. What these truths are, clever fans can discover through close analysis of the trilogy.

Read a Sample on Wattpad

Read a Sample on Wattpad

Millions of readers around the world have been swept away by the nonstop action and poignancy of The Hunger Games. But what most readers don’t know is that there’s a library’s worth of history, plant lore, and mythology behind the world of Panem. Now, with Katniss the Cattail, those without access to Collins’s bookshelf can discover the fascinating reality behind Panem.
Katniss the Cattail allows curious readers to look up all the names of Panem and discover a wealth of entertaining, unexpected information. Blight, Cato, and Clove have names that predict their grisly ends, while the evening primrose represents eternal love, youth, and sadness. Boggs was a civil war general, Plutarch a biographer who wrote skewed critiques on Coriolanus and Caesar. There’s a reason Johanna Mason knows more than she’s telling and that Cressida and Messalla betray the Capitol.

From Alma Coin to Wiress you’ll learn about

Title: Katniss the Cattail: An Unauthorized Guide to Names and Symbols in Suzanne Collins’ The Hunger Games

Who was Cinna? What do the hawthorn and primrose symbolize? Or President Snow’s garden and Peeta’s bread? What about Katniss’s last name? Bringing details from myths, herbal guides, military histories, and the classics, English professor and award-winning pop culture author Valerie Estelle Frankel sheds light on the deeper meanings behind Panem’s heroes and villains in this hottest of YA trilogies. In her series, Collins not only weaves a heroic tale of deep complexity but harnesses the power of Shakespeare and Rome to retell an ancient epic of betrayal, violence, and glory on the stage of an apocalyptic future.

“If you’re a fan of The Hunger Games, you need this book! Period…I devoured this book the moment I opened my mailbox. Every time I read something “new” about a character, my brain started turning.” —The Flashlight Reader

“Full of thought provoking observations, Katniss the Cattailis a quick, clean read for any fan of The Hunger Games trilogy.” —Sarah’s Reviews

“If you dig The Hunger Games like crazy, this book lets you glimpse at it a bit closer” —The Book Wurrm

“I would highly recommend this book to others interested in discovering the hidden meanings of The Hunger Games.” —My Book Addiction

(See below for full citations)

Learn more with The Scottish Surnames of Colonial America and A Dictionary of First Names.

Learn more with  A Complete Etymology of Names in Panem  and Hogwarts Professor: Thoughts for Serious Readers.

Learn more with Language of Flowers and Botanical.Com: A Modern Herbal.

Learn more with Stanford Encyclopedia of Philosophy and The Theoi Project.

Learn more with Shakespeare’s Collected Works or this simplified version for kids.

SYMBOLS OF THE HUNGER GAMES

The Girl Who Was on Fire

Analyzed in detail in pages 63-80 of Katniss the Cattail.

THEMES IN THE HUNGER GAMES

The Wastefulness and Callousness in America

Suzanne Collins dreamed up her concept for The Hunger Games as she saw the lines blur between war news and reality TV, a concept that appears throughout her trilogy. While there are parallels with celebrity makeover shows, wedding shows, and talent competitions, the Hunger Games are closest to Survivor. The disturbing part as contestants suffer through starvation and injury in fetching bikinis is that their scenario is no more real than the environment of the Hunger Games—they are trapped on their island purely to entertain the masses with their misery. She who is most entertaining will live longest. And as author Suzanne Collins offers us this world of reality television filled with real deaths, she reminds us not to become blind to suffering, even on television.

Children Taking Care of Each Other

The Hunger Games is coded as a battle of adults versus children. In this world, President Snow is the ultimate adult and ultimate user, staging the Games that murder children. In Katniss’s world, parents are useless and the older children protect the younger, as she does Prim, or Rue does her younger siblings. However, Katniss fails to become a leader.  Book one sees her outsmarting the Game to save Peeta as well as herself, but she has no message of rebellion for her audience. Dressed in a young girl’s gown that reflects her immaturity, she charms the president into publically sparing her. Only at the end of Mockingjay, Katniss finally embarks on her own mission, leading the adults to go assassinate President Snow. However, when Katniss realizes that President Coin has murdered Prim and the children she was saving, and that Coin plans to restart the child-killing Hunger Games, Katniss breaks every adult law and expectation to shoot the real target. She turns from the protector of living children to the champion of the dead, even as she leaves her own childhood behind forever.

The Power of Nature

Katniss and Rue, named for the natural environment they embody, succeed using the skills they learned out in the country: Rue’s knowledge of berries and healing herbs, Katniss’s hunting and gathering skills. Even Peeta’s camouflage, as he paints himself into the river and becomes part of it, is essential to keep him alive. Their lifestyle of simplicity and economy contrasts with the Capitol’s at every turn. The Games, by contrast, is a startlingly artificial environment with mutts, firestorms, and a golden cornucopia full of whatever the Gamemakers want to distribute. Katniss wins the Games with her nature skills but always longs for the simplicity of the forest, where she truly belongs.

Looking Below the Surface

Of course, pearls are a symbol of hidden value in the story, beginning with Effie Trinket’s ridiculously incorrect comment that the children  of District Twelve may have unexpected talents because “If you put enough pressure on coal, it turns to pearls” (HG 74). Granger notes the pearlsymbolizes “genius in obscurity,” or undiscovered talent across the world because the precious gem is hidden within the secret chamber of an oyster (“Unlocking ‘The Hunger Games’”). Mags and Madge, whose names mean pearl, both come to embody this quality.

By the time Peeta gives Katniss a tiny pearl in Catching Fire, she’s come to realize that he too has value below the surface. Notably, Greeks and the western culture that followed considered the pearl a sign of betrothal and love (Shepherd 214).

These pearl characters shine like beacons, guiding Katniss to see how Snow’s tyranny affects even the privileged, even those who seem witless or clownish: All these people can be heroes in the end. Snow takes all three of these pearl characters from Katniss, leaving her without guidance in the third book, struggling to find the light she craves as it dances on a wall like her flashlight.

Finding an End to War

“Something is significantly wrong with a creature that sacrifices its children’s lives to settle its differences…it benefits no one to live in a world where these things happen,” Katniss comments in Mockingjay (377). In fact, both sides lose so many people that the citizens of Panem risk dying from underpopulation…generations after their ancestors bombed earth into a wasteland. “We’re fickle, stupid beings with poor memories and a great gift for self-destruction,” comments Plutarch Heavensbee, the eternal commentator in the series (M 379). The series ends suggestiong another war will come in another generation, once all of Panem’s heroes have forgotten these precious lessons.

Katniss receives soldier training and goes into combat with incendiary arrows and guns. Yet she’s one of many female soldiers in the book. Leeg 1 and 2, Boggs’s second-in-command Jackson, Commander Paylor of District Eight. As Collins puts powerful female Tributes in the Games, and strong female military leaders in the war, she casually shows us that women are as capable as men, even in the most frightening arena.

George Orwell, author of Animal Farm and 1984, often said, “Power corrupts. Absolute power corrupts absolutely.” In other words, even a good person would become evil after gaining the power of presidency over Panem. In Animal Farm, the pigs lead a revolution against the oppressive farmers, but soon they elevate themselves over their fellow animals, becoming indistinguishable from the masters they once hated. Though they fought to save their brethren from tyranny and won, nothing changes—the new leaders are just as bad. Here is the true danger of power, and it’s one to which President Coin has succumbed even before her victory.

In Catching Fire, Katniss wonders if District Thirteen exists, why it’s done nothing to help so many innocents. “Why do they leave us to live like this? With the hunger and the killing and the Games?” she demands (CF 148). At this moment she realizes, prophetically, that they are no better than the Capitol.

Katniss’ first indicator that something is seriously wrong is when she finds her former prep team shackled and abused on one of the lower levels. Just when Katniss has been agonizing over Peeta being tortured and kidnapped by President Snow, these innocents are likewise being cruelly treated. Katniss quickly realizes that their mistreatment is a message from President Coin, that she is in control and can do what she likes with Katniss’s friends. This has been the message that President Snow has always sent her, as he threatens Katniss’s family, and bombs Katniss’s district. When Katniss tries to warn Plutarch, he calmly replies that he’s immune from harm, as he’s indispensable to Coin’s war effort. Katniss replies, “The tributes were necessary to the Games, too. Until they weren’t” (M 51). After fighting through two Games, she’s learned that those in charge can always change the rules.

Coin imprisons Snow in his beautiful rose gardens, and Katniss realizes it’s to set a precedent: If Coin is deposed in the future, it will be understood that presidents are entitled to special treatment. Clearly President Coin realizes that this revolution may be followed by another as history repeats and the people defy their new dictator. She too orders executions and scapegoating as she repeats more of Snow’s agenda. Finally, Coin wishes to reinstate the Hunger Games, forcing children to atone for the wrongs of the Capitol. As the scent of Snow’s last rose wafts through the room, Katniss wonders how similar the meeting was that created the Games, seventy-five years before. This chilling moment shows Katniss that truly nothing has changed.

WORKS CITED (for Katniss the Cattail and this website)

Bennett, Harold. Cinna and His Times: A Critical and Interpretive Study of Roman History during the Period 87–84 BC. Menasha, WI: The Collegiate Press, 1923.

Frankel, Valerie Estelle. From Girl to Goddess: The Heroine’s Journey in Myth and Legend. USA: McFarland and Co., 2010.

“Major Sir Hamish Forbes, Bt: Champion of Highland and Gaelic Culture who as a Wartime POW had been Decorated for his Numerous Escape Attempts,” The Times, September 20, 2007. Web. http://www.thesundaytimes.co.uk.